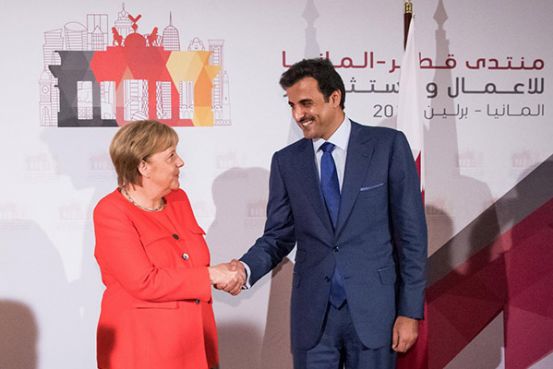 The Amir H H Sheikh Tamim bin Hamad Al-Thani announced Friday in the speech he gave at the opening of The Qatar-Germany Business and Investment Forum that Qatar intends to invest 10 billion Euros into the German economy in the next five years.

The 9th edition of the forum began this morning at the Maritim Hotel in Berlin, with Chancellor of Germany Dr Angela Merkel, Mayor of Berlin Michael Muller and a large number of Qatari and German businessmen as well as journalists in attendance.

The speech of Amir was as follows:

In the Name of God, the Most Merciful, the Most Compassionate,

At the outset, it pleases me to be with you at the Qatar – Germany Business and Investment Forum. I would like to avail myself of this opportunity to extend my thanks and appreciation to Her Excellency Chancellor Angela Merkel for her support and keenness to make this Forum a success, reflecting the depth and strength of the relations between the State of Qatar and the Federal Republic of Germany at all levels.

We treasure the distinct relations of cooperation and friendship with Germany, which began more than 60 years ago, and Germany is now a strategic partner with the State of Qatar. We are aware of the strength of the German economy, and Germany’s central active role in Europe. We respect its developmental work in the southern hemisphere, and its thoughtful rational role on the international arena. Organizing this joint Forum comes within the framework of our interest in consolidating and strengthening the partnership between our two countries in all political, economic and cultural fields, etc., in order to pursue our development march which aims to achieving Qatar National Vision 2030 goals, including economic diversification and transformation towards the knowledge-based economy.

The relationship between Qatar and Germany has been strengthened over the past seven years, especially in the field of trade, investment and construction. The volume of trade exchange between our two countries has doubled between 2011 and 2016 to reach about 2.8 billion Euros, mostly in favor of Germany, which has become the third largest world exporter to Qatar. This volume of exchange decreased in 2017 due to temporary regional reasons, which were imposed on us, leading to a short-lived drop in Qatar’s imports from various countries.

Furthermore, German companies operating in Qatar play a significant role in the development of Qatars economy. More than 300 companies are active in vital sectors such as construction, infrastructure and consultancy services. In addition, Germany is an important destination for Qatari investments totaling nearly 25 billion Euros. These investments include vital projects in the automobile, information technology and banking sectors. It should be noted here that air transport plays a key role in extending the bridges of cooperation and bilateral interaction in commercial, tourism, investment and cultural fields between our two countries. 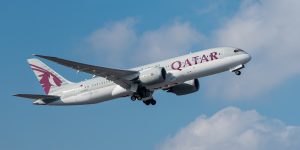 Qatar Airways‘ many flights to Germany have contributed to a rise in the number of German visitors to the State of Qatar, which increased with a high rate in 2017.

During the period 2000-2014 Qatar’s GDP reached unprecedented levels of growth worldwide. This growth was coupled with macroeconomic indicators pertaining to national savings, domestic investment, current account and public budget, which have done us proud. Needless to say, these growth rates have subsequently dropped because of the collapse of oil and gas prices. But Qatars economy has proven its resilience vis-a-vis this decline and against the backdrop of the difficult circumstances our region is passing through. However, Qatar’s GDP per capita is still among the highest in the world, if not the highest. The World Bank expects our economy to grow by 2.8% in 2018 and by 3% in 2019 and 2020. Also the credit rating and competitiveness reports released by international institutions have continued to place Qatar at high international rankings.

Qatar economy’s main driver at this stage is the non-oil sector, which relies mainly on massive investments in infrastructure – especially education, health, transportation and constructions required for hosting the 2022 FIFA World Cup – and on achieving progress in economic diversification as a result of implementing the First National Strategy 2011-2016, and starting to execute the Second Strategy 2018-2022, which will focus on increasing the private sector investments in these projects by providing incentives, enhancing capacities, offering public-private partnership projects and attracting direct foreign investments.

Over the recent years, the State has developed and made pivotal amendments to a number of legislations to achieve this end, including the commercial companies law, the non-Qatari capital investment regulation law, the new free zones law, and the procedures for the development and expansion of industrial areas and logistics zones.

Development projects in the State of Qatar provide great opportunities for German companies to increase their contribution to the development of Qatars economy in other sectors, in addition to the infrastructure and construction sector, especially in education, training and research sector as well as in small and medium enterprises, as Germany is a pioneer in these two fields. In this context, I refer to the constructive cooperation between our scientific and university institutions.

We will witness today the signing of an agreement to open a German university in Qatar under the supervision and administration of the Technical University of Munich, in cooperation with the Qatars private sector. I refer also to the cultural events witnessed by the Qatari-German cultural year 2017, which culminated in the establishment of the Arab Cultural House “Al Diwan” in Germany to be a center for cultural interaction and a bridge of communication between our peoples. It is important to note here that I and my people still remember with great appreciation and respect the moral attitude expressed by the Federal Republic of Germany in rejecting the ongoing illegal measures imposed last year on the State of Qatar by some of its neighbors.

From this Forum, we call upon the private sector in Germany to explore the promising Qatari business environment which is teeming with plenty of projects in various fields. On the other hand, in expression of our confidence in the strength of the German economy and the importance of investing in it, I declare the intention of the State of Qatar to inject investments worth 10 billion euros into the German economy over the next five years as another addition to our successful investments in Germany.

In conclusion, I reiterate my thanks to you for attending and participating in this Forum, and I hope that its outcome would result in successful investment partnerships in all fields serving our common interests.

May the peace, mercy and blessings of God be upon you.