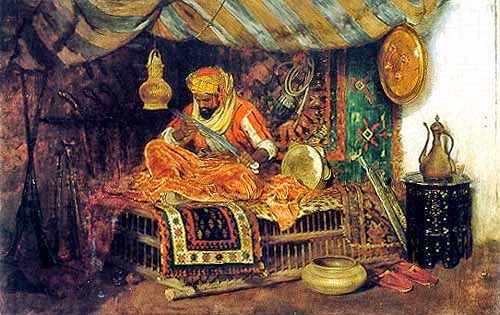 In today’s metrosexual society we hear about fashion and lifestyle icons such as David Beckham. We hear about couture culture, fashion, food and design. We regularly see a multitude of lifestyle magazines, fine dining shows, master classes on etiquette and style often associated and linked to places such as Paris, London and New York.
Yet if we turn back the hands of time and peer into history we will be amazed to discover the hidden treasures of Islamic Spain also known as Al-Andalus.

We sift through the sands of time and discover an individual by the name of Abu I-Hasan, ‘Ali Ibn Nafi’ (789-857) better known as Ziryab and nicknamed ‘Blackbird’. His legend is all but forgotten in modern fast paced societies. Yet his influence echoes throughout the corridors of time. Ziryab was born in what is now known as modern day Iraq. He was extremely talented and had a diverse range of skills in various fields. He was known to have been a teacher, composer, poet, Oud player, singer, culturalist and far advanced for his time becoming one of the greatest musicians in his era.

It is reported Ziryab was of mixed heritage being African/Arab. After spending his early years in Iraq he migrated moving through the majestic streets of Syria, into Tunisia and then onto Al Andalus. He lived in one of the greatest cities in the world at that time, Cordoba under the patronage of Abdar-Rahman II. Ziryab was paid a handsome salary on a rolling monthly basis consisting of a large amount of Gold Dinars, the pro bona currency in the region at the time.

Ziryab was famed for a long line of achievements in his lifetime and aristocrat court career. He was one of the first people to open a music school within the great city of Cordoba. Ziryab was able to start a vogue creating a popular taste for wearing different clothes during different seasons, as well as having clothes for the day and evening. He used & invented different forms of body deodorants & toothpaste.

Ziryab introduced into Europe the famous haircut ‘short back and sides’ where in comparison many men previously in the region would have their hair kept long. His hairstyles and hair oil treatments helped change styles in Al Andalus. Ziryab was famed for introducing the idea of etiquette and fine dining. He developed the theme of three course meals, starting dinner with soup for example a main dish and then a dessert.

The legend of Ziryab and his influence upon contemporary lifestyles, fashion and designs is still observable in contemporary society. Ziryab changed the way society thought about hygiene, music, style, clothes, food and dining. He was truly a trend setter and the precursor to many fashions and aspects of lifestyle that people delve into modern society today.