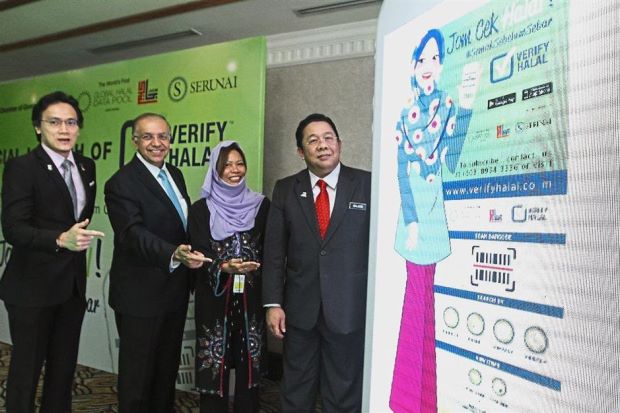 KUALA LUMPUR: It will be much harder for unscrupulous parties to pass off non-Halal products as Halal, with the launch of a smartphone app called Verify Halal.

The app is now available on the Google Playstore for Android users while iOS users have to wait two more months for its release.

Developed by local company Serunai Commerce in cooperation with the Malaysian Islamic Development Department (Jakim), it is simple to use.

All the users have to do is scan the product barcode with their smartphone and the app will verify whether or not it is Halal.

“This means we will be connected to hundreds of thousands of companies worldwide,” said Amnah who is also the founder of the Verify Halal app.

“If our users detect dubious products, they can report it to us and we will pass the information to Jakim for further action,” she said at the launch of the app by Jakim’s Halal Hub director Datuk Dr Sirajuddin Suhaimee here yesterday.

“We will be expanding the platform to en­­hance verification for small retailers. Seru­nai will continue to help evolve the trading architecture of the global Halal market,” she said.

In his speech, Dr Sirajuddin said it was imperative for the growth of the Halal economy that it was not hampered by dubious certification and the spread of unverified news.

“It is important for Muslims not only in Malaysia but the world over to have a peace of mind as well as the ability to instantly verify the integrity of Halal products,” he said.

He added that Verify Halal was not only directly connected to Jakim, but also to numerous other global certification bodies that it recognised.

Amnah said participating companies need to pay an annual fee of RM500 to be listed as Halal food or product suppliers in the app.

She said it was a small sum considering the business they would enjoy through being a certified part of the lucrative Halal business sector.