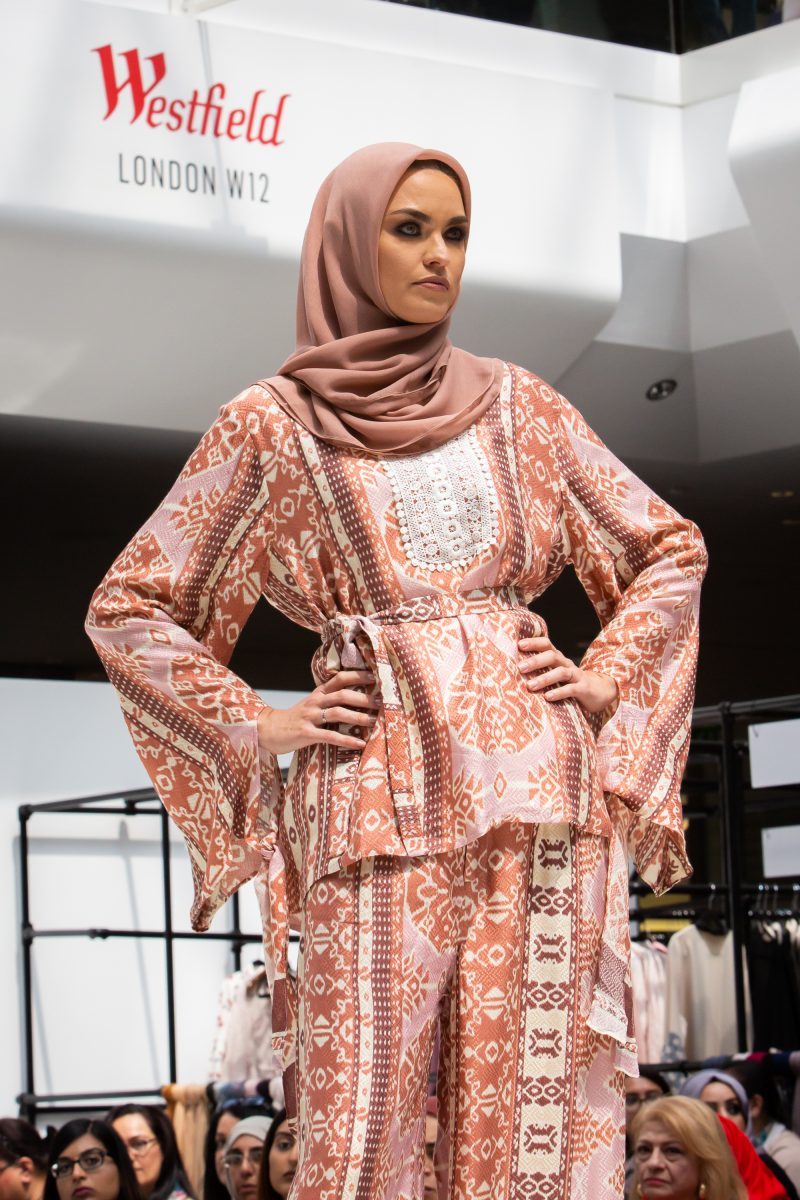 Modest Fashion Live partners with popular western labels to present a first-time-ever east-meets-west fashion show 25​ th​ June 2018 –​ This weekend, the visitors of Westfield London, W12 were treated to a first-of-its-kind fashion show: Modest Fashion Live, which showcased leading Muslim fashion houses alongside well-known Western brands. The melting pot of designs were shown in the popular shopping centre’s Atrium, at the heart of the mall, and was watched by thousands of avid Saturday and Sunday shoppers.

The ticketed event saw six shows over the two days and was witnessed by 1000s of people visiting the shopping hotspot in Shepherd’s Bush. The catwalk was sponsored by Indonesian-born brand, HIJUP, and it was right on the Westfield stage that they launched their British-based label, Hijup UK.

First to walk the runway was Vivi Zubedi, a brand with nearly 300k Instagram followers, she is famed for her modern approach to modest fashion, and she didn’t disappoint. Wowing the crowd, she displayed classic ladylike pieces mixed with more youthful logo-emblazoned athleisure-inspired designs. Each show, which lasted roughly 45-minutes, revealed the diverse style that is modest fashion today. As more designers displayed their work, the more exciting and varied the show got. Pieces included floaty, empire-line dresses adorned with 1970s-inspired tie-dye prints, to more conservative office-ready tailored styles toughened up by metal chain belts – there really was something for everyone. But what made this catwalk show stand out was the fusion of eastern and western brands that walked together in a seamless and stylish way. Shoes by Aldo and bags from Aspinal were paired with eastern outfits, while French Connection and Jigsaw presented full outfits to the fashion-hungry crowd. This event marked the first time any western mainstream brand had featured on a Modest Fashion runway in the UK. Alongside the catwalk were pop-up boutique stalls offering exclusive offers and discounts for Eid shopping within the centre.

In-between shows, guests were transported outside to the 25-degree sunshine in Westfield Square, the centre’s new outdoor entertainment space created as part of a recent £600 million expansion. Surrounding the crowd-filled space, just a stone’s throw away from the famous Portobello Road, there were fine foods on offer from halal street food vendors, churro stands, burger bars and vegan German sausages.

Modest Fashion Live aims to break down the barriers between the Muslim consumer market and the mainstream, and build a bridge to this lucrative untapped economy for brands including some of those calling Westfield London, W12 home. The event has been organised by the people behind the successful London Muslim Lifestyle Show and London Halal Food Festival.

Adhiba Dar, CEO at Modest Fashion Live​ said: “We believe that fashion should be accessible to all, and while modest dressing is a rising trend in the fashion industry, it’s also a way of life for those within this economy. Our ethos is to help bring the world together on one runway, and this event is a positive step in breaking down social misconceptions.” The Muslim pound is seen as a valuable and largely untapped opportunity for the UK economy. By 2030, the Muslim community is forecast to make up more than a quarter of the global population, making it the fastest growing consumer group on the planet.

Waleed Jahangir, CEO, Algebra Consulting​, said: “This economy is predicted to be worth $4.7 trillion within the next few years, so for brands understanding the potential of this market the opportunity is huge. This free-to-attend event has been created as a positive step in breaking down any social misconceptions and showcasing a rich and diverse community. Consumerism and commerce has no colour.” The expansion of Westfield London, W12 launched on 20 March 2018, six months ahead of schedule. On completion, the centre will comprise 450 retail, dining and leisure outlets across 2.6m sq. ft. offering an enhanced customer experience.