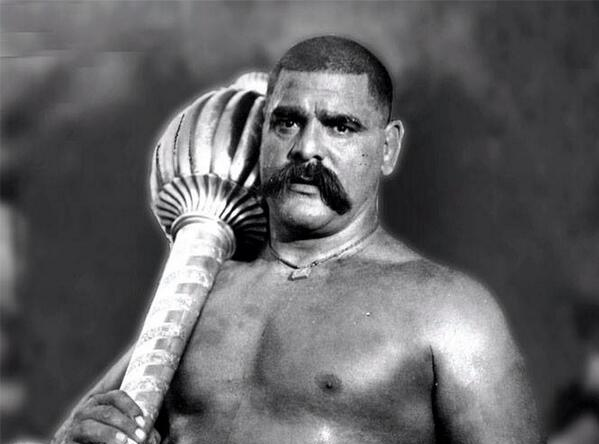 Among his legendary accomplishments was when he challenged the top 12 wrestlers of Europe and America to a bout on the same day and one after the other defeated them all, none lasting more than a few seconds!

A few years ago an international tournament of Desi Kushti was held in Kohlapur district in India’s Maharashtra state as reported in the Nation. Some wrestlers from Lahore were taking part and a rumor spread that in one of the bouts the great grandson of Gama Pehalvan is taking part. Astonishingly a crowd of 200,000 poor villagers stood in rain for 14 hours to catch a glimpse of this man only because of his heritage, the local newspaper declared, “The grandson of the God of Wrestling is coming.” I am not sure if the grandson of the God did come but certainly such an honor would not even be reserved for Sachin Tendulkar.

Ghulam Mohammaed, known as Great Gama was an incredible man and perhaps did have superhuman powers. Born in Amritsar to a Kashmiri family, he went on to win titles of Rustam-e-Hind (Champion of India) and Rustam-e-Zaman (Champion of the Universe). During a career of over 50 years he was never defeated, even though at 5 foot 7 inches he was usually much shorter than his opponent.

Among his legendary accomplishments was when he challenged the top 12 wrestlers of Europe and America to a bout on the same day and one after the other defeated them all, none lasting more than a few seconds!

Early in 1947 with the fire of hate spreading through Punjab Gama Sahib moved to Lahore and settled on Mohni Road. Gama Sahib told the Hindus of his mohala that if they are attacked he will defend them with his life and when one day a mob approached the community Gama Sahib stood in front of them with all of his group of wrestlers, as the leading hooligan came near a slap from Gama Sahib sent him flying and the rest ran away never to come again.

A few days later Gama Sahib escorted all the Hindus to the border where with tears streaming from his eyes he bade them goodbye giving them one weeks food from his own money.

Unfortunately towards the end of his life he struggled financially and is rather unknown among the present generation of Pakistani youth despite the fact that he is the great grandfather of Kalsum Nawaz, the wife of Nawaz Sharif.