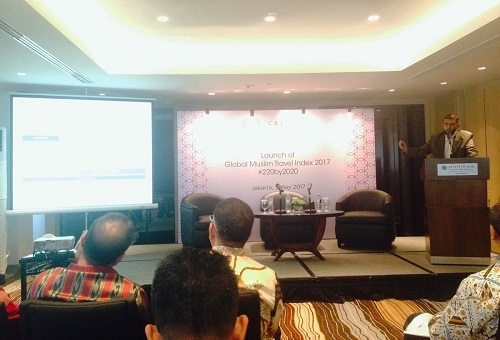 Indonesia has increased its score on the 2017 Global Muslim Travel Index (GMTI) by two points to 72.6 from 70.6 in 2016, raising its position to third place from fourth.

Indonesia displaced Turkey, whose score decreased by 1.5 points to 72.4 this year, while Malaysia and the United Arab Emirates (UAE) have maintained their positions in first and second place, with 82.5 and 76.9, respectively, according to an annual survey by a leading authority on Halal tourism, CrescentRating.

CrescentRating cooperates with technology company Mastercard in evaluating and ranking countries based on how well they cater to Muslim travellers.

The 2017 GMTI survey covered 130 destinations and the index is based on benchmarks from travellers, tourist boards, economists, travel service providers, stakeholders, investors and industry specialists.

The four strategic areas evaluated in the index are access, communications, environment and services.

CrescentRating CEO Fazal Bahardeen told reporters on Wednesday that Indonesia’s score had improved over the past two years, supported by the government’s efforts to promote investment in the tourist sector.

He added that security concerns in Turkey last year might have caused the decline in its score.