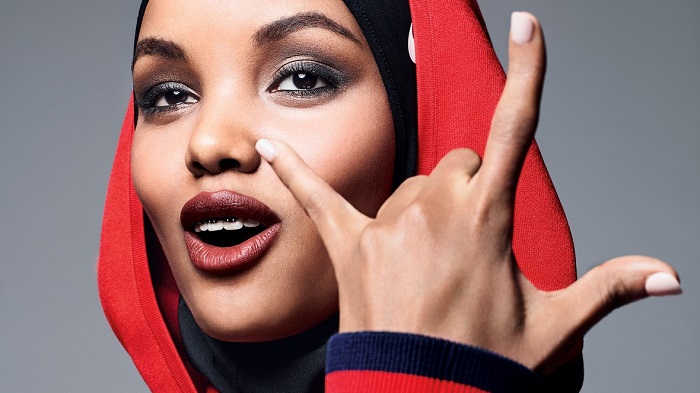 Halima Aden graced the cover of the Allure July issue, sporting a bright red Hilfiger Collection hoodie with the Nike swoosh peeking underneath, embossed on the black power mesh hijab of the same athletic brand. She’s cool, she’s sporty, she’s gesturing the “rock on” sign with her hand. She’s all-American. The Somali-American beauty, born in a Kenyan refugee camp, is a talent breaking barriers. Between collecting major international magazine covers, from CR Fashion Book to Vogue Arabia, to making headlines at New York and Milan Fashion Weeks, trailblazing and glass ceiling-breaker Halima is one of the most buzzed about fashion models right now.

As the hijab begins to appear more in the mainstream Western fashion industry and as modest fashion is gradually capitalized on, where is the line between empowerment and profit from one of the most visible Islamic symbols of modesty? You’d think the use of hijab-wearing models is a nod to inclusiveness, but it has to be more complex than that. Right?

A few months ago, Nike unveiled their plans to launch the Nike Pro Hijab for 2018. Voices from a myriad of talented Muslim female athletes from the Middle East and beyond couldn’t be ignored anymore, as many found a hole in the market for performance and sports hijabs. Not so long ago, giant retailer H&M cast Mariah Idrissi as its first-ever hijabi model in their campaign to promote sustainable fashion, alongside a diverse ensemble. Most recently, American Eagle debuted denim hijabs with Halima Aden rocking the item as part of its newest jeans collection.

In high fashion, Dolce & Gabbana launched a collection that included hijabs and abayas (full-length cloak garments customary in the Muslim world and predominantly worn in the Arabian Peninsula countries) last year. When the Italian house presented the collection, Forbes qualified it as the “smartest move in years,” in parallel with the burgeoning Middle Eastern luxury market of $8.7 billion. Thomson Reuters’s Global Islamic Economy Report for this year indicated growing significance of Muslim consumers globally: Spending on clothing and footwear was estimated at $243 billion in 2015 (11% of global spending) and is anticipated to grow to $368 billion by 2021. Is everyone jumping on the lucrative bandwagon? Perhaps. What’s clear is that advertisers and corporations picked up on the gap in the market and capitalized on this “hijab opportunity.”

Western fashion advertising has the power to boost a movement, to propel an idea and promote values of inclusiveness. However, advertising companies are always in perilous territory when it comes to representing an identity. The line is often crossed when the sanctity of the hijab is compromised for the sake of mainstream commercialism. I would say Muslim women like myself do not need a brand to acquiesce to their religious identity, but others may feel inspired by the positive representation, and that’s totally valid. Still, this diversity in fashion should not be perceived as trendy, but rather subsist as a permanent and perpetual state in the industry. It needs to persist.

It is mandatory for brands and advertisers to keep in mind that they can’t play with an entire identity while wanting to normalize it for Western fashion. According to The Council on American-Islamic Relations, 2017 is on track to becoming one the worst years ever for hate crimes against the Muslim community, with a 91 percent spike in the first half of 2017 compared to 2016. While delving into this market to foster diversity, the fashion industry must realize that representation is not commensurate with equality, especially for women.

Halima told Allure: “I have much more to offer than my physical appearance, and a hijab protects me against ‘You’re too skinny,’ ‘You’re too thick,’ ‘Look at her hips,’ ‘Look at her thigh gap.’ I don’t have to worry about that.” Indeed, the hijab acts as a shield of safety, which could be more than necessary in this ruthless industry. I can tell how empowered and invested a Muslim model could feel if for instance, the whole fashion team collaborates and is accommodating of the model’s modesty values. That’s what the fundamentals of fashion should resemble; they push the limitations of what is considered normal and force you to communally work together.

As I saw the buzz surrounding Halima’s Vogue Arabia June cover in the Middle East and the rest of the world, I was quick to anticipate the intersectional positivity and impactful representation of her being a model of color and the visibility of her faith with her hijab. In comparison to Gigi Hadid’s cover story for the same publication, where the veil was styled and portrayed as a fashionable accessory draped elegantly around her visage, Halima’s cover was appropriately and culturally empowering.

As a pioneer in the milieu, will Halima become a token or will she be joined by more hijab-wearing models in high fashion? One step to elevate inclusiveness on the subject is for designers, stylists, artists, editors, executives in the fashion industry, and the audience to collectively educate themselves about the meaning of hijab and modesty in Islam. From there, anything can run smoothly and the use of the hijab can be portrayed correctly.

Like any identity represented through the medium of fashion, there will always be a thin line between depiction and exploitation. The hijab in fashion is not a novelty in Muslim-majority societies — from Jakarta Fashion Week to Dubai-based fashion bloggers; voices of hijab-wearing women are echoing and being heard in the industry. In a Western context, it can become easily exploitative to use a community which is currently targeted and systemically oppressed by the government — one must be conscious of the implications. One thing for sure is that mainstream doesn’t mean acceptance. On the other hand, acceptance irrefutably leads to possibilities and opportunities for marginalized visible Muslim women in the industry.

Let’s hope the possibilities continue to grow in a positive way.