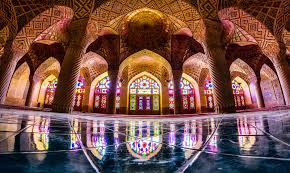 A Mosque is a place of worship and contemplation in the Islamic faith. The word is derived from the Arabic term Masjid. Many Mosque’s exist all over the world and are diverse in their designs, architecture and appearance. The physical features of Mosque’s vary there are traditional Mosques which have domes and minarets and more contemporary designed Mosques which have elaborate modernity features and adhere to architecture style pending on geographical location to suit the environment they are built in. The function of these religious buildings is for congregations to offer five daily salat (prayer), to learn how to read the Holy Quran in Arabic and to listen to reminders of Islamic teachings.

Sometimes mosques also operate as educational establishments, providing wider subjects, social spaces, youth facilities, community services amongst other amenities. The Mosque is often led by a committee and an Imam (teacher). There are many Mosques throughout the Islamic and western regions which are aesthetically awe inspiring, majestically designed and have amazing architecture and colour internally and externally often decorated in dazzling shapes and calligraphy. 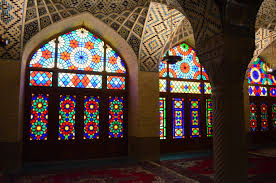 One example of amazing Islamic religious architecture is the Nasir ol Molk Mosque sometimes referred to as the Pink Mosque which is located in Shiraz, Iran. It is located in the district of Gowad-e-Araban, near Shah Chéragh Mosque. This is an amazing religious building as it includes a fascinating range of coloured glass and displays other traditional elements such as the Panj Kase (five concaved) design. The interior style and features include a large array of pink tiles, hence the alternative name of the Pink Mosque is often ascribed to this place of worship. 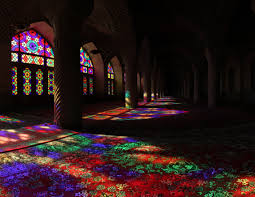 The actual Mosque itself was built in 1876 and took around 12 years to complete under the patronage of Mirza Hasan Ali (Nasir ol Molk) under the rule of the Qajar era. The two main designers of the Mosque were Mohammed Hassan and Mohammed Reza, who were two distinguished and talented architects. The mosque is currently maintained and kept in good order through the Endowment Foundation of Nasir ol Molk. This is a must see feature of any travellers itinerary and continues to amaze tourists and locals 140 years after the first foundation brick was laid when originally built.